Selective hearing: Old dogs only listen to what they want to hear 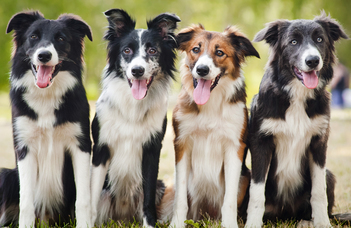 In human aging, a phenomenon named the positivity effect has been described, which means that older people pay less attention to and remember worse on stimuli displaying unpleasant, negative emotions. Consequently, they experience relatively more positive emotions. Currently, there are multiple theories among scientists as to what can be the underlying cause of this shift. The researchers were interested in whether a similar phenomenon can be found among aging dogs, too.

They played back three types of human sounds to young and old dogs: positive sounds (laughs), negative sounds (crying) and neutral sounds (hiccup and cough). This design allowed us to determine whether old dogs are less reactive toward sound playbacks altogether, toward emotional sounds in general or only toward a specific emotion category-explains Dóra Szabó, the first author of the article.

40 dogs were analysed in the study, where the researchers measured dogs’ spontaneous reactions while their owners were reading a magazine and listening to music (so they could not hear the test sounds).

The results showed that old dogs react slower only to negative/crying sounds, in line with the age-related positivity effects, while their reaction time did not differ toward other sounds and they were paying just as much attention to the sounds as young dogs did.

So far, this effect was thought to only exist in humans, dogs are the first non-human species where this phenomenon has been described. This puts the theories trying to explain its emergence in a new perspective, as we think it less likely that dogs would consciously reflect upon their longevity and ultimate death. The results suggest that brain aging affects emotion processing similarly in dogs and humans, confirming that the family dog is an especially useful and valuable model of human aging. - summarizes Enikő Kubinyi, senior author of the study.