Dogs may never learn that every sound of a word matters 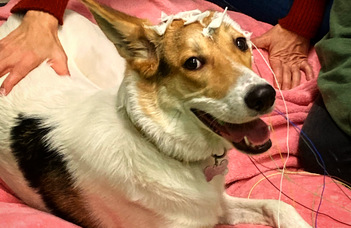 Despite their excellent auditory capacities, dogs do not attend to differences between words which differ only in one  speech sound (e.g. dog vs dig), according to a new study by Hungarian researchers of the MTA-ELTE 'Lendület' Neuroethology of Communication Research Group at the Eötvös Loránd University, Budapest measuring brain activity with non-invasive electroencephalography (EEG) on awake dogs. This might be a reason why the number of words dogs learn to recognize typically remains very low throughout their life. The study is published in Royal Society Open Science.

Dogs can distinguish human speech sounds (e.g. “d”, “o” and “g”) and there are similarities in the neuronal processing of words between dogs and humans. However, most of the dogs can learn a few words only throughout their lives even if they live in a human family and are surrounded by human speech. Magyari and her colleagues hypothesized that despite dog’s human-like auditory capacities for analyzing speech sounds, dogs might be less ready to attend to all differences between speech sounds when they listen to words.

To test this idea, the researchers developed a procedure for measuring electrical activity in the brain non-invasively on awake, untrained, family dogs. Electroencephalography (EEG) is an often used technique in human clinical and research studies and it has been also successfully applied on tranquilized, sleeping or awake but trained dogs. However, in this study, the researchers measured EEG on awake dogs without any specific training.

“The electroencephalography is a sensitive method not only to brain activity but also to muscle-movements. Therefore, we had to make sure that dogs tense their muscles as little as possible during measurement. We also wanted to include any type of family dogs in our study not only specially trained animals. Therefore, we decided that instead of training our dog-participants, we will ask them just to relax. Of course, some of the dogs who came to the experiment could not settle down and did not let us do the measurement. But the dropout rate from the study was similar to the dropout rate in EEG studies with human infants. It was also an exciting process for us to learn how we can create a relaxing and safe atmosphere in the lab for both the dogs and their owners.” -says lead author Lilla Magyari, postdoctoral researcher at Department of Ethology, Eötvös Loránd University, Hungary.

The analysis of the recorded electric brain activity showed that dog brains clearly and quickly discriminated the known words from the very different nonsense words starting from 200 ms after the beginning of the words. This effect is in line with similar studies on humans which show that the human brain responds differently to meaningful and nonsense words already within a few hundred milliseconds. But the dogs’ brains made no difference between known words and those nonsense words that differed in a single speech sound only. This pattern is more similar to the results of experiments with human infants who are around 14-months. Infants become efficient in processing phonetic details of words, which is an important prerequisite for developing a large vocabulary, between 14 and 20 months. But younger infants do not process phonetic details of words in certain experimental and word learning situations despite the fact that infants are able to differentiate speech sounds perceptually within weeks after birth.

“Similarly to the case of human infants, we speculate that the similarity of dogs’ brain activity for instruction words they know and for similar nonsense words reflects not perceptual constraints but attentional and processing biases. Dogs might not attend to all details of speech sound when they listen to words. Further research could reveal whether this could be a reason that incapacitates dogs from acquiring a sizable vocabulary.”- concludes Attila Andics, principal investigator of the MTA-ELTE 'Lendület' Neuroethology of Communication Research Group.

This study was published on the 9th of December in Royal Society Open Science titled “Event-related potentials reveal limited readiness to access phonetic details during word processing in dogs”, written by Lilla Magyari, Zsófia Huszár, Andrea Turzó and Attila Andics. This research was funded by the Hungarian Academy of Sciences (Lendület Program), the National Research, Development and Innovation Office and the Eötvös Loránd University (ELTE).