Enikő Kubinyi wins an award for women is science 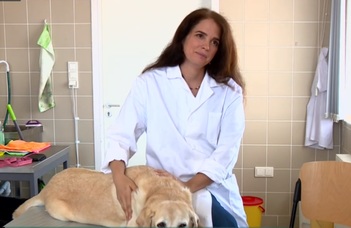 This year, one of the winners of the L'Oréal–UNESCO Award For Women in Science is Enikő Kubinyi, senior research fellow at the Department of Ethology of the Faculty of Science, Eötvös Loránd University and at the Senior Family Dog Project. She received the recognition at the Hungarian Academy of Sciences on 24 September 2018.

In 1998 L’Oréal launched its fellowship programme titled “For Women in Science,” supported by UNESCO with the aim of encouraging and recognizing women all over the world who have contributed to the development of scientific life through their discoveries. In order to reward women at different levels of their careers, three programmes have been set up. One of these is the L’Oréal-UNESCO National Fellowship, and the calls for applications are announced each year by the subsidiaries of L’Oréal with the support of the national commissions for UNESCO to motivate young women researchers to pursue a scientific career in their home countries. Due to this fellowship programme, these talented young women are not only supported in their own scientific careers, but also become the ambassadors of science and scientific career. Hungary joined the programme in 2003, and since then, over HUF 40 million has been awarded to women working as scientific researchers at universities and at the institutes of the Hungarian Academy of Sciences. The program is sponsored by the Hungarian Academy of Sciences.

Enikő Kubinyi joined the Family Dog Project of the Department of Ethology, ELTE in the year of its foundation in 1994. She participated in the earliest experiments carried out in the field of ethorobotics, when robots were involved in ethological investigations and dog-like robots were adapted to techniques used in animal training. In addition, she studied the behaviour of wolf pups in the framework of the first Hungarian Wolf Project.

She is currently principal investigator of the Senior Family Dog Project launched in 2016. This project is funded by the European Research Council Starting Grant 2015 aimed to support young researchers:

the lives of more than one hundred ageing dogs are followed for four years within the project.

Ageing is a serious problem in developed societies: while today every tenth person is over 60, it is expected that by 2050 every fifth person will be 60 years old. Guidelines for a lifestyle toward successful ageing, and the development of preventive methods and therapies are of key importance in Western-type societies, in which the role of dogs also becomes important.

With her research, Enikő Kubinyi, senior research fellow at the Department of Ethology, ELTE,

contributes significantly to demonstrating that dogs are among the best animal models for exploring human ageing.

In addition the fact that they live with us, they are affected by the same environmental factors, and they are also similar to us from behavioural, genetic, and physiological aspects. For example, they spontaneously show symptoms similar to human dementia when ageing.

The international research group headed by her is working towards identifying changes in the brain caused by ageing so that its degradation could be stopped in time. With their research results, they contribute to the long, healthy lives of both humans and their pets. They have developed behavioural tests, with the help of which one can identify the deterioration of memory, problem solving, and learning abilities resulting from ageing without extra training. The loss of brain function is also studied by special measuring instruments and imaging techniques. The good news is that the behaviour of active, regularly trained dogs does not change despite the shrinkage of the brain inasmuch as they still like to learn, although they are somewhat slower than younger dogs.

As part of the project, Enikő Kubinyi and her colleagues have established a wold-class Canine Brain and Tissue Bank, where they store and study tissues from dogs offered by owners whose pets were euthanized for medical reasons. This also makes possible molecular analyses related to ageing.

The other award-winning scientist of this year is Edit Csapó, senior research fellow at the MTA–SZTE Biomimetic Systems Research Group belonging to the Institute of Medical Chemistry at the Faculty of Medicine, University of Szeged, funded by the Hungarian Academy of Sciences.