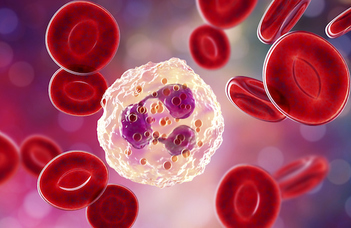 The INFLANET international consortium has received a grant of € 4 million from the European Commission. The consortium has developed a complex study of the inflammatory process that has become extremely important due to the pandemic. The Hungarian coordinator of the H2020 project is Tamás Vicsek, Professor Emeritus of the Faculty of Science at Eötvös Loránd University, who has a vast experience in researching systems of swarming entities and has always emphasized the need to take his discoveries to practical implementation.

The prevalence of chronic inflammatory diseases in western societies is 5-7%. The disease process, recently referred to as the “silent killer,” can cause a number of unpleasant symptoms in the body, from rashes to clogged airways to joint pain. We now know that when inflammation becomes chronic, it is responsible for the emergence of almost all diseases of civilization, even diabetes. The pathological process that is causing an increasingly serious public health problem has long preoccupied researchers, but with the emergence of COVID, its understanding and curing have become particularly relevant worldwide.

A unique international consortium has formed in this field in 2020, which, in addition to the complex study of the inflammatory process and the recommendations for the development of treatments, the consortium also undertakes training a young team of experts in the framework of research in European institutions. The INFLANET program has received a grant of € 4 million from the European Commission through the prestigious Marie Sklodowska-Curie ITN grant. The program launched in March 2021 and will end in 2025.

INFLANET is made up of 13 European partners from the academic field and the private sector. The consortium is coordinated by the University of Montpellier and, in addition to Eötvös Loránd University, the French National Centre for Scientific Research (CNRS), the Institut Pasteur, Leiden University and several other European universities are members as well. One of the unique features of the project is that, in addition to academic participants, representatives of the industry sphere are also involved, such as the French company Azelead (a consortium member), and the British-Swedish pharmaceutical company AstraZeneca (an external partner). The unusual complexity of INFLANET is also compounded by the fact that interdisciplinary and intersectoral research brings together experts from several scientific disciplines: biologists, physicists, immunologists, and geneticists, as well as mathematicians, programmers, and modellers, which can bring new results. In addition,

the project will train the next generation of European Experts in Inflammation,

who will be able to build a strong professional network in the field through their relationships over the four years.

The program will focus on cellular mechanisms of inflammatory processes: how the body perceives inflammation and how it propagates into tissues. To achieve this, rather new omics approaches are used, in which they try to find the characteristic patterns of biomolecules in a great number of databases, responsible for structure, function and dynamics of inflammation. Cutting-edge intravital imaging strategies in animal models are also used to study molecular and cellular mechanisms of the inflammatory process and the effect of anti-inflammatory drugs. They also examine what genetic bases there might be for the process, and what therapeutic strategies can be used against it. The project also aims to develop original mathematical modelling tools to analyse the wealth of data generated.

ELTE, as a participant institution, takes part in the work of the consortium, led by Tamás Vicsek. Before the turn of the millennium, the physics professor at the Department of Biological Physics began to deal with movement within bacterial colonies and then with group movement of cells. In 2017, he wrote an article in the framework of international collaboration, in which he studied zebrafish with his fellow researchers and found that during embryonic development, frictional forces lead to the global rearrangement of cells and, through this, shape the subsequent structure of the nervous system. Among other things, this led the INFLANET program to study the processes that can be observed during inflammation, including the movement of immune cells. As the Hungarian coordinator of INFLANET, he plans to cooperate with Professor Anna Erdei, an immunologist from ELTE, and with Ádám Dénes and Zsuzsanna Környei of the research group at the Institute of Experimental Medicine (KOKI, ELKH).