Our physicists at the frontline of femtoscopy 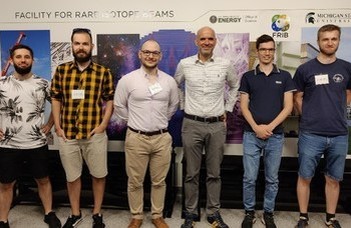 In July 2022, the 15th Workshop on Particle Correlations and Femtoscopy, the most important international forum in the field of femtoscopy, was held in East Lansing (Michigan, USA), which was attended by an outstanding number of ELTE physicists, who delivered six papers. The presented results may have an important impact on the investigation of the space-time structure of the quark material and the search for the critical point in the future.

The data collected over the last 10–15 years during experiments carried out at high-energy particle accelerators – Super Proton Synchrotron (SPS), Relativistic Heavy Ion Collider (RHIC), and Large Hadron Collider (LHC) – indicate that a quark material of nearly perfectly liquid state, or as it is called by professionals, the strongly-interacting quark-gluon plasma is formed during ultra-relativistic heavy-ion collisions. It is the hottest material artificially produced by man, and it existed under natural conditions in the first few millionths of a second following the Big Bang, when it filled the entire Universe.

“In particle accelerators, we are able to reproduce this hot and dense quark matter in an extremely small quantity and for a short period of time. The spatial and temporal structure of this material can be mapped with the help of quantum statistical techniques. The underlying principle of the method is that, due to their quantum nature, the correlations of the momentum of the detected particles reveal the spatiotemporal structure of the material that made them. Due to the characteristic femtometer range, we also call this field femtoscopy,” says Máté Csanád, head of the ELTE group.

Photographs of three experiments in heavy-ion physics and the reconstructed particles from each collision. The individual experiments in order: STAR, PHENIX, and CMS.

Since 2005, researchers working in this field all over the world come together regularly at the conference series entitled “Workshop on Particle Correlations and Femtoscopy” (WPCF) to discuss their new findings. This year, it was the 15th occasion that the WPCF was organised, and six papers delivered by ELTE scientists were included in the programme. Every tenth lecture was connected to ELTE, so

ELTE offered one of the largest groups of speakers at this year's conference.

On the first day, Balázs Kórodi (M.Sc. student in physics) gave a paper on the quantum statistical correlations measured in the LHC CMS experiment, László Kovács (B.Sc. student in physics) presented the results achieved in collaboration with RHIC PHENIX, Dániel Kincses (doctoral candidate) reported on the RHIC STAR experiment, while Barnabás Pórfy (Ph.D. student in physics) talked about the SPS NA61/SHINE measurements. All of them investigated the space-time structure of the quark matter using the so-called Levy-stable distributions. Their results together show that this medium does not follow the previously assumed normal (Gaussian) distribution, and the mathematical measure called stability exponent can reveal the phenomena taking place during the “freezing” of the quark matter.

On the subsequent days of the conference, Gábor Kasza (doctoral student, ELTE, Wigner Research Centre for Physics, and the Hungarian University of Agriculture and Life Sciences) presented the exact mathematical results achieved in modelling the fluid dynamics of quark matter, and Máté Csanád (Doctor of the Hungarian Academy of Sciences, associate professor at the Department of Atomic Physics) presented the measurements made with the Event Plane Detector of the STAR Experiment, which may also be important in searching for the so-called critical point of the quark material.