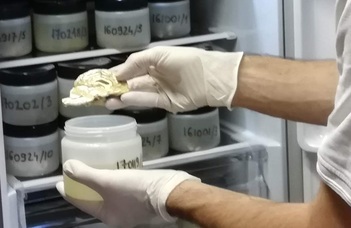 Two recent papers from Hungarian researchers highlight the so far underrated relevance of pet dog biobanking in molecular research and introduce their initiative to make pioneering steps in this field.  The Hungarian Canine Brain and Tissue Bank (CBTB) was established by the research team of the Senior Family Dog Project in 2017, following the examples of human tissue banks. In a recent paper, the team reports findings, which would not have been possible without the CBTB, and may augment further progress in dog aging and biomarker research.

Even though dogs have a much shorter average lifespan than humans, the aging path of the two species has remarkable similarities. Hence our best friends have attracted the attention of aging researchers. Most importantly, dogs tend to develop similar age-related diseases as humans do, including dementia, which is not typical for most other animal species. However, not every human or dog is affected by age-related ailments to the same extent. The ability to foresee the individual tendencies and provide interventions, which can shift aging to a healthier track, is the holy grail of aging research.

to test interventions and understand the factors that determine aging. These goals, however, require a deeper insight into the microscopic levels of canine aging as well.

As stated in the recent review paper from the Senior Family Dog Project at the Department of Ethology, Eötvös Loránd University, dog biobanks would represent a valuable source of tissues and other biological materials, which could not be gathered for scientific purposes in any other way. “Medical research often relies on laboratory dogs, but keeping them to study natural aging would be time-consuming, expensive and ethically debatable.” – told Dr. Sára Sándor, geneticist, first author of the review published in the journal GeroScience.

Dog biobanks, which collect and store samples from pet dogs, which lived with their owners until being euthanized for medical reasons or old age, may provide valuable support to dog research without the need to include more laboratory animals. “Pet dogs represent various breeds and live together with their owners. Therefore,

we can grasp the effects of lifestyle and environmental stressors on aging and dementia in dogs like in no other model animal.”

- told Dr. Enikő Kubinyi, the principal investigator of the research group. “When we started to study the aging of hundreds of old dogs due to a European Research Council Starting Grant, we realized that during the project, many of these dogs would, sadly, pass away due to natural causes. We could ask the owners whether they would further support research by offering the body of their deceased dogs, we thought. Linking behavior, pet-keeping conditions, and molecular data would result in a unique biobank. We were relieved and very grateful that many owners said yes. Luckily, we met a committed and highly knowledgeable veterinary anatomist, Dr. Kálmán Czeibert, who helped us to establish the Canine Brain and Tissue Bank”. 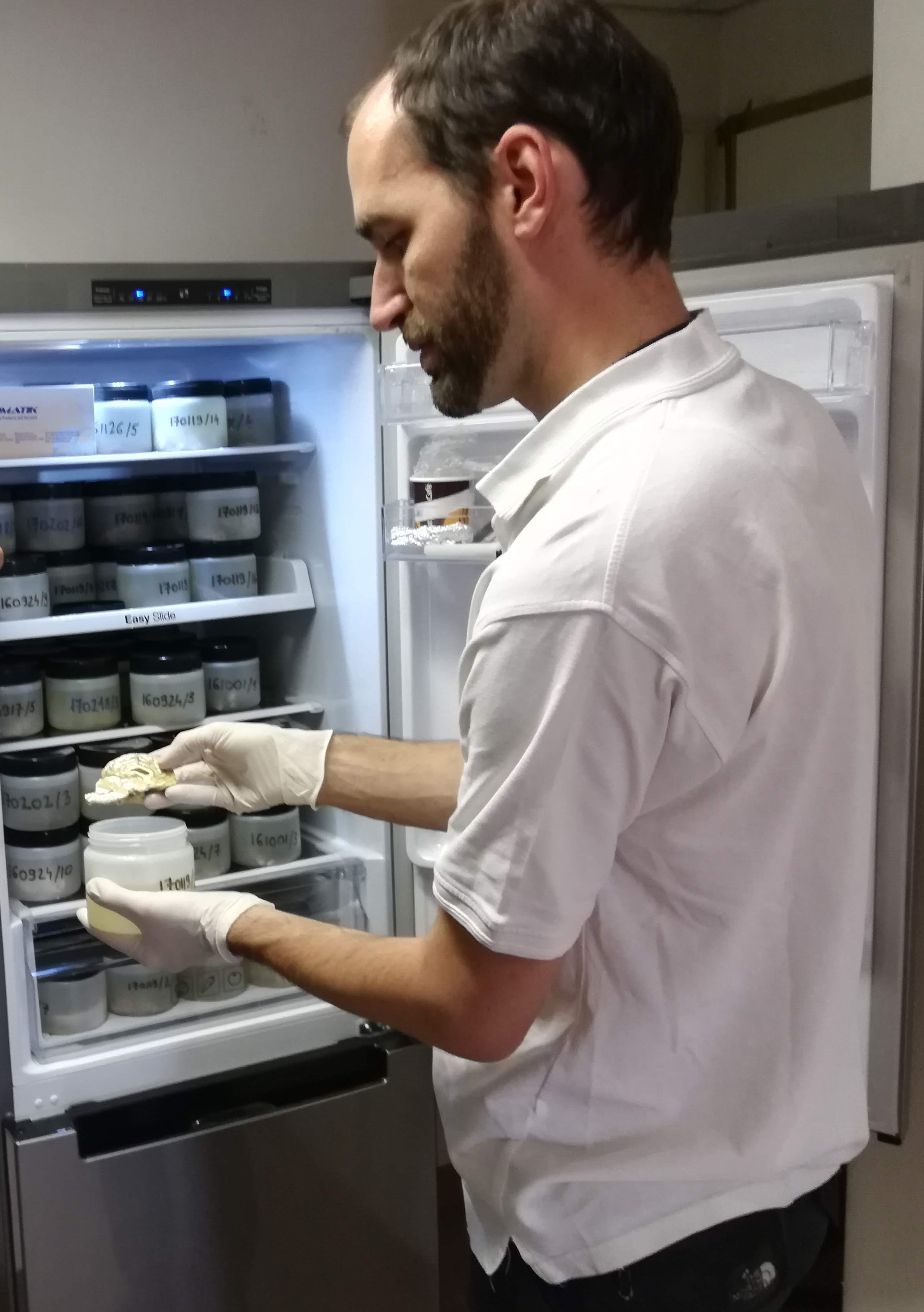 Creating and managing a pet dog biobank holds several challenges, which have to be addressed appropriately, – as discussed in the review paper. Some of these issues, like protocol optimization and communicating the goals in the public media, are shared by human biobanks, which, in contrast to dog biobanks, have a vast literature of protocol development and experiences.

“The bank currently keeps 130 dog brains and other tissues.

Besides continuously upgrading our protocols, we conduct our own studies and are open to sharing the samples with research groups from all over the world.” – adds Dr. Czeibert.

The CBTB research team first delved into actual molecular research by measuring the amount of protein-coding RNA molecules – termed gene expression – in canine tissues collected by the CBTB. RNA molecules are very sensitive and may degrade soon after the animal’s death, making an especial relevance for the CBTB, where tissues can be stabilized only a few hours following the euthanasia of animals. The specific target of this study, published in Frontiers in Veterinary Science, was the cyclin-dependent kinase inhibitor 2A or, shortly, CDKN2A gene. This gene has been proposed as a powerful aging biomarker in humans because it shows an increased expression – a higher number of RNA molecules – in several human tissues with age. This correlation is exceptionally high in the brain tissue of older people affected by dementia. Finding such biomarkers, which can signal the onset of some age-related diseases before actual symptoms take place, is crucial for clinical applications in both dogs and humans. 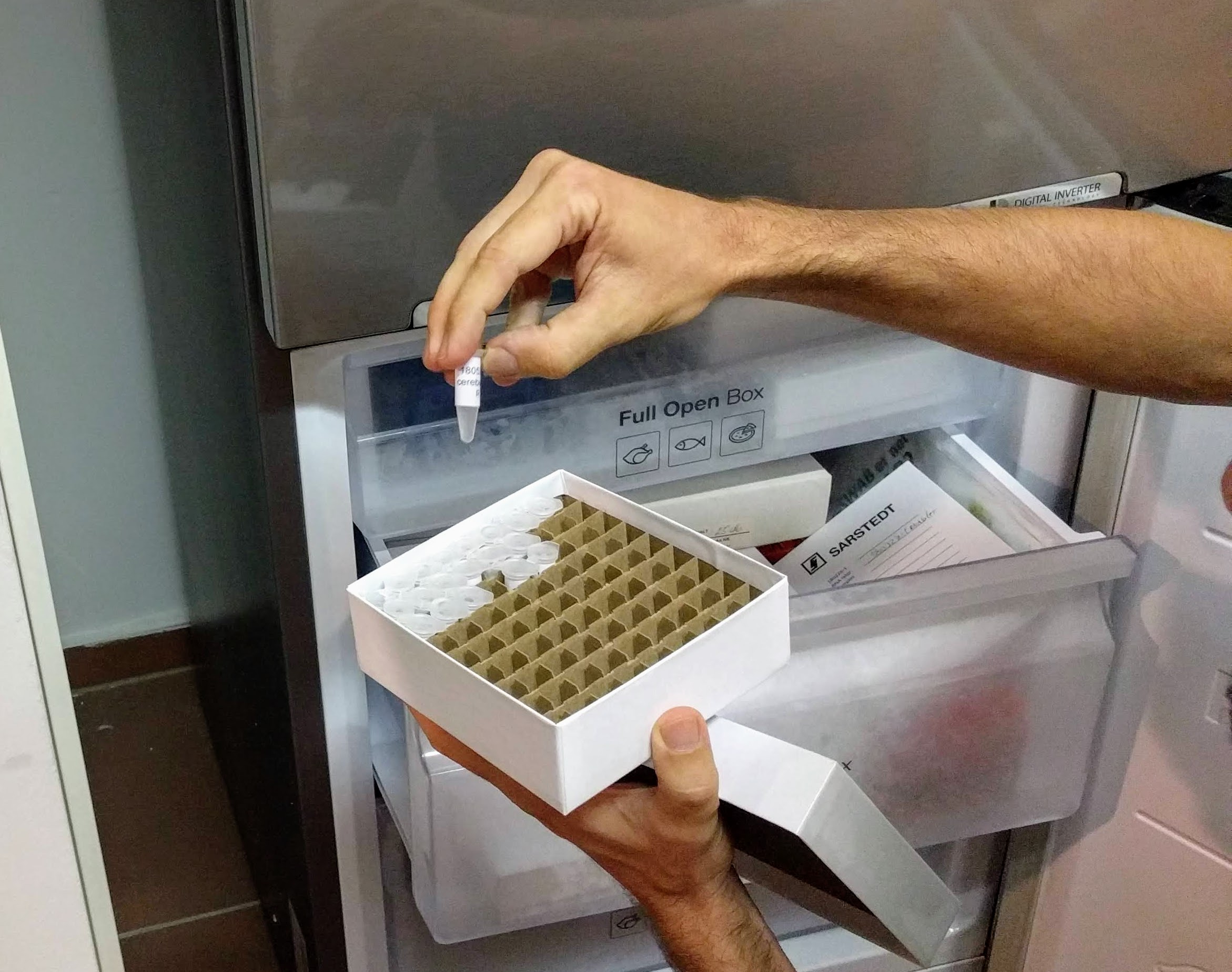 The researchers examined brain, skeletal muscle, and skin tissue from the donated dogs Following human studies. The team found that older dogs’, on average, had more CKDN2A mRNA in their brains and muscles than younger dogs, indicating a positive correlation between CDKN2A expression and age – however, they have not found a similar correlation in the skin.

These results, even the inconsistency between tissues, matched previous human findings.

The scientists were also curious about how CDKN2A behaved in blood obtained from live animals, as this question would have direct implications for clinical applications. As a first step, they tested 15 border collies and found a moderate, positive correlation with age. “This less pronounced correlation means that further research will be required to validate whether CDKN2A could suffice as a blood-borne biomarker for clinical application in dogs.” – added Dr. Sándor. “However, the robust correlation in the brain shows apparent promises for comparative dementia research because it suggests that similar cellular senescence mechanisms contribute to brain aging in dogs and humans.”

Hence, it seems that our canine companions will become our best friends in aging research as well.