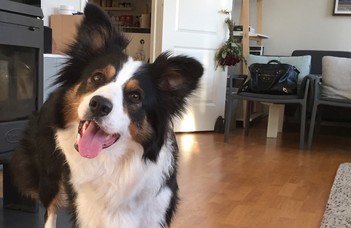 A new study of the researchers at the Department of Ethology found that talented dogs can learn new words after hearing them only four times.

While preliminary evidence seems to show that most dogs do not learn words (i.e. names of objects), unless eventually very extensively trained, a few individuals have shown some exceptional abilities.

The Family Dog Project research team at the Department of Ethology, Eötvös Loránd University, Budapest is investigating on these exceptionally talented dogs who seem to learn words in the absence of any formal training, but simply by being exposed to playing with their owners in the typical way owners do, in a human family.

A new study, just published in Scientific Reports, has provided surprising results about how quickly the gifted dogs can learn new words. Two gifted dogs, a Border Collie named Whisky, from Norway, already famous for her spontaneous categorization skills and a Yorkshire terrier named Vicky Nina, from Brazil, participated in this experiment. Their ability to learn a new word after hearing it only four times was tested.

While it is natural to think that dogs, like human children, would learn words mostly in a social context, previous studies tested the ability of talented dogs to learn object names during an exclusion-based task. In such task the dog was confronted with a setup in which seven familiar, already named dog toys were present, together with a novel one and his ability to choose the novel object upon hearing a novel name was tested.

"We wanted to know under which conditions the gifted dogs may learn novel words. To test this, we exposed Whisky and Vicky Nina to the new words in two different conditions" explains Claudia Fugazza, first author of the study, "during an exclusion-based task and in a social playful context with their owners.

Importantly, in both conditions the dogs heard the name of the new toy only 4 times".

In the exclusion-based task, the dogs showed that they were able to select the new toy when their owner spoke a new name, confirming that dogs can choose by exclusion - i.e., excluding all the other toys because they already have a name, and selecting the only one that does not. However, this was not the way they would learn the name of the toy. In fact, when tested on their ability to recognize the toy by its name, as this was confronted with another equally novel name, the dogs failed. 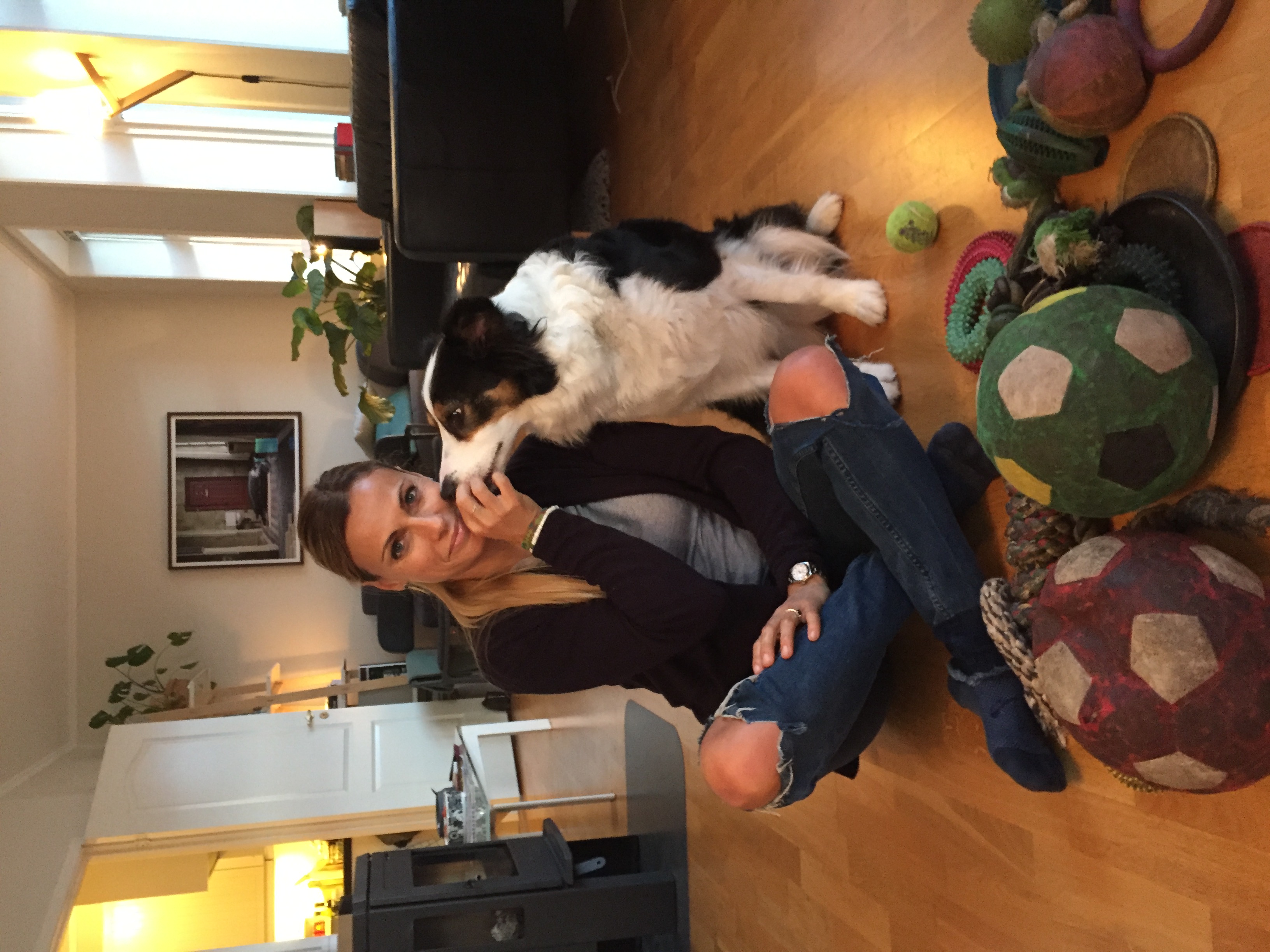 Claudia Fugazza (leader of the research) and Whisky

The other condition, the social one, where the dogs played with their owners who pronounced the name of the toy while playing with the dog, proved to be the successful way to learn the name of the toy, even after hearing it only 4 times. Whisky and Vicky Nina were able to select the toys based on their names when they had learned the names this way.

"Such rapid learning seems to be similar to the way human children acquire their vocabulary around 2-3 years of age", comments Adam Miklósi, head of the Department of Ethology and co-author of the study.

To test whether most dogs would learn words this way, other 20 dogs were tested in the same condition, but none of them showed any evidence of learning the toy names, confirming that the capacity to learn words rapidly, in the absence of formal training is very rare and is only present in few gifted dogs. 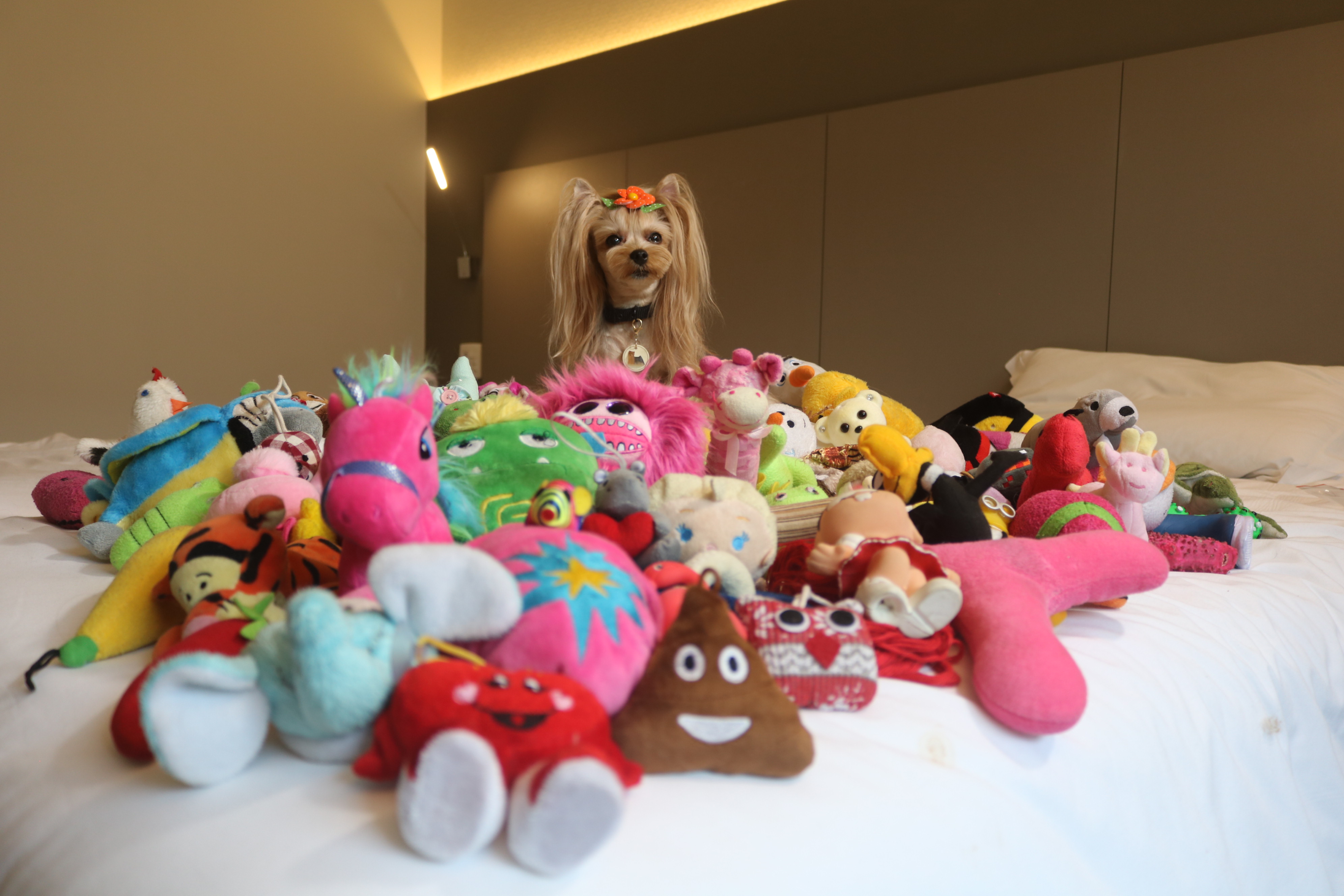 Vicky Nina among her toys

After such few exposures, however, Whisky's and Vicky Nina's memory of the learned words decayed quite fast. While in the first test, conducted a couple of minutes after hearing the toy names, the dogs were successful, they did not succeed in most of the tests conducted after 10 minutes and 1 hour.

To find out more about the number of words that the gifted dogs can learn in a short timeframe, the researchers of Eötvös Loránd University have also recently launched the Genius Dog Challenge a project that became viral in the social media.

Vicky Nina, unfortunately, passed away in the meantime and could not take part in the Genius Dog Challenge. Whisky is participating in it, together with other five talented dogs that the scientists found all over the world in the past two years of search.