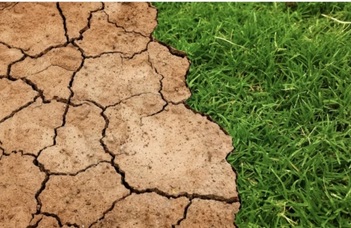 The drought situation demands an urgent solution to the European agriculture and the reconstruction of soil moisture. The latest drought map by the researchers of the Eötvös University, the Budapest University of Technology and Economics, the Geographical Institute Research Centre for Astronomy and Earth Sciences and the Institute for Soil Sciences draws attention to the most critical areas in Europe, which includes Hungary. In addition, they highlight methods to stabilize soil moisture in the long term. At a landscape scale, the extensive wetland restoration is an appropriate solution as proposed by the European Commission and currently being discussed by the European institutions

Summer half year soil moisture decreased in almost 50 % of European croplands, but to the greatest degree in Eastern Europe, while Northern Europe suffered least of all, as revealed in a study published by Hungarian researchers in the flagship journal of European agronomy. The wettest soils were found in the Alpine, Baltic and West Balkan countries, as well as in North Western Europe. However, a major part of the Mediterranean and the Carpathian-Balkan regions and Ukraine recorded the driest soils over recent decades.

The warming of the climate and shrinking freshwater resources pose serious challenges to both natural and planted ecosystems on the continent. Due to the rising pressure of climate change crop yields display an increasingly strong dependence on the variability of soil moisture. Therefore, the coexistence of the crop yield dependence on soil moisture and the decrease in available soil water content pose a considerable threat to grain production stability over the most important agricultural landscapes, from France to the breadbasket of Europe, Ukraine. According to Zsolt Pinke, Senior Research Fellow at the Department of Physical Geography, Faculty of Science, Eötvös Loránd University, and his fellow researchers, the never-before-seen long drought period since 2015 in half of Europe urges a rapid intervention to stop or slow down the constant decline in soil moisture.

The adaptation methods traditionally suggested include the relocation of certain land uses towards less drought prone regions, generally from south to north. But land management techniques, in e.g. conservation agriculture, provide further farm-level opportunities to address the issue, such as with sowing densities, no-till and mulching practices. Considering the typically strong hydraulic relationship between surface waters and soil moisture or shallow groundwater, different solutions for water retention, including the restoration of wetlands through systematic and controlled flooding as a managed aquifer recharge (MAR), are appropriate forms of climate change mitigation strategies at the landscape scale. As a part of climate smart land use systems, MAR can be efficiently used to enhance the drought resilience of plains, which are central to agricultural production. The utilisation of floodwater for MAR via wetland restoration in arid and semi-arid regions is a concept subject to intensive research.

In recent decades, wetland restoration has increasingly been considered a key step towards the achievement of climate mitigation goals. Currently, the European Union is setting its sights on restoring 25,000 km of its rivers with their floodplains. Putting this plan into action may effectively raise groundwater table and improve soil moisture conditions in European regions that are important for the human food supply.