Our hydrogeologists visited the Joint Research Center of the EU 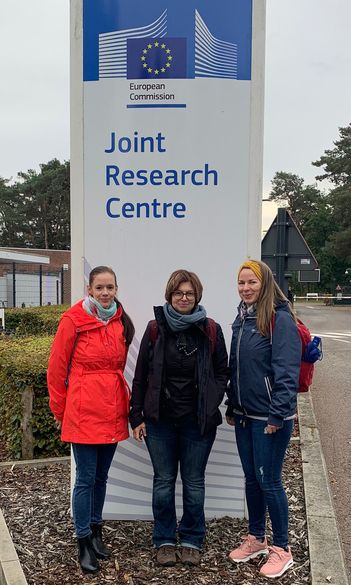 ELTE hydrogeologists visited the European Commission's Geel Joint Research Center through a collaboration. They visited the RADMET laboratory of the JRC, where they could see the equipment and procedures for measuring nuclear decay and also took part in a workshop focusing on measuring radioactivity.

Between 26-29 September, Anita Erőss, Katalin Hegedűs-Csondor and Petra Baják, the hydrogeologists of the ELTE József Tóth and Erzsébet Endowed Hydrogeology Chair and Foundation who deal with the natural radioactivity of groundwater visited the European Commission's Joint Research Center (JRC-Geel) under the Research Infrastructure Access Agreement No. 36227-1 / 2021-1-RD-EUFRAT-RADMET.

During their stay, they visited the JRC-RADMET laboratory, which has a wide range of instruments for measuring nuclear decay, determining related nuclear data, and radiological characterization of environmental samples and various materials. They also visited the reference material laboratory, where they saw the instruments and devices used to prepare different reference samples (e.g. food, drinking water, cement, etc.) for proficiency tests and interlaboratory comparisons for European laboratories. They could also see a low-energy and a high-energy tandem accelerator. With the GELINA accelerator, the energy range of up to 15 MeV is investigated, while with the MONNET accelerator they experiment in a higher energy range (up to 24 MeV). By using these facilities, they primarily test radioactive decay that occurs in nuclear reactors, but the technology is also used in material analysis, archeology and medicine.

The hydrogeologists visited the HADES (High-Activity Disposal Experimental Site) laboratory which is located underground, at 225 m depth. The laboratory was built in a layer of clay more than 100 m thick for the investigation of nuclear waste disposal in the geological environment. The underground tunnel system also houses the JRC's laboratory for measuring low-activity samples. With the gamma spectrometers there, measurements of exceptional accuracy are carried out without disturbances caused by cosmic radiation. Some water samples collected from the Hungarian study areas that were sent as part of the cooperation are also measured here.

In the second half of the week, they participated in a workshop focusing on the measurement of environmental radioactivity, together with JRC researchers, SCK CEN (Belgian Nuclear Research Institute) and University of Hasselt researchers. ELTE's hydrogeologists were introduced by Anita Erőss. The introductions were followed by scientific presentations focusing on analytical methods and the evaluation of results. Anita Erőss presented the group's research results on the radioactivity of groundwater. Another goal of the workshop was to promote cooperation between these institutions.

In the framework of the ELTE - JRC-Geel collaboration, completion of nuclide-specific measurement of water samples from Hungarian research areas and determination of the uranium isotope ratio will take place, which would not be possible due to the lack of laboratory capacity at ELTE. On the one hand, the results can be used to characterize groundwater flow systems and their transport processes, and on the other hand, they contribute to health risk estimation and safe drinking water supply.